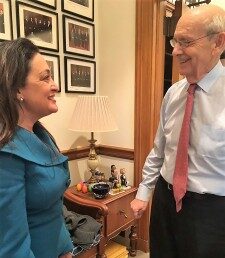 Suzanne met with Justice Breyer in his Chambers overlooking The U.S. Capitol in Washington, D.C.

Suzanne also attended oral argument of 2 cases argued before all 9 Supreme Court Justices.  Each Justice is nominated by a U.S. President and confirmed by the U.S Senate. The Justice sitting within 2 feet of Suzanne’s seat was new Justice Kavanaugh who was seated next to Justice Kagan.  It was also inspiring to see Justice Ruth Bader Ginsburg in person and hear her ask questions!  Oral argument for each case lasted about an hour.  The argument was more of discussion that began with the attorneys making opening statements and the Justices actively asking questions.  The parties to the case do not speak.

As an attorney and commentator teaching and speaking about real estate law, the November 26 visit was an honor for Suzanne because the United States Supreme Court is the highest court in the U.S. making decisions of national importance.

No photos of the interior of the Court Room are included in this blog because cameras and telephones are not allowed in the court room.

P.S. Many of the Justices are former law professors!  Yeah for Professor Real Estate®

Suzanne believes in the 4 words carved into the U.S. Supreme Court “Equal Justice Under Law.”  She knows the importance of these words, because when teaching Supreme Court cases in classes in the U.S. and abroad,  her students are surprised that ordinary people may appeal a lower court decision all the way up to the Supreme Court.  Although Suzanne teaches real estate and property rights cases, she explains to her students that the Supreme Court  hears all types of case that involve interpretation of the U.S. Constitution.

A few days after her  Supreme Court visit, Suzanne attended the Miami Dade Chamber Holiday Gala where Rap Singer Luther Campbell, of Too Live Crew, won the Distinguished Service Award. Mr. Campbell took a case all the way up to the Supreme Court regarding free speech and rap music… and he won and setting a precedent (decision followed around the Nation)  – click here to watch a video about it!  Again showing that the U.S. Legal System is designed for everyone to have due process and a right to their day in court!