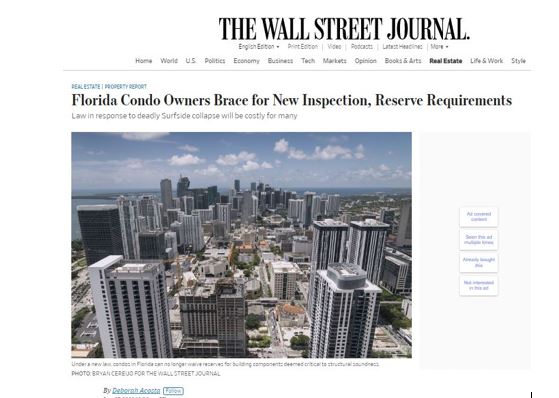 Under a new law, condos in Florida can no longer waive reserves for building components deemed critical to structural soundness.PHOTO: BRYAN CEREIJO FOR THE WALL STREET JOURNAL

Condo owners in Florida, already getting squeezed by increasing insurance costs, also might get hit soon by higher monthly fees from new state regulations on structural inspections and reserve funds.

Gov. Ron DeSantis in May signed the law in response to the 2021 tragic collapse of Champlain Towers South in Surfside, Fla., that killed 98 people. Under the new law, new structural inspections are required of most condo buildings over 30 years old, or 25 years old if within 3 miles of the coast.

Even if structural repairs aren’t needed immediately, the bill has other major provisions involving reserve requirements that might become a big financial headache for many condo owners.

In Florida it had been a common practice for associations to simply waive their reserves year after year, according to Suzanne Hollander, a real-estate lawyer and professor at Florida International University’s Hollo School of Real Estate. Owners at Champlain Towers South put off paying for repairs partly because owners fought over paying for them.

But under the new law, condos can no longer waive reserves for building components deemed critical to structural soundness. Many condo associations will have to make up reserves waived in prior years and provide new reserves not previously required for certain structural issues.

About two-thirds of buildings in the Miami area are older than 30 years. Many will probably pass a visual inspection that won’t be too costly. “If buildings have been doing regular upkeep, they shouldn’t have a problem,” said Michael Liu, director of the Miami-Dade Department of Public Housing and Community Development.

But buildings that have deferred maintenance for decades might not pass the visual inspection. In that case a more extensive inspection might be required. The new law also gives local governments powers to penalize condo associations that don’t address needed repairs.

Restoring reserves as required by the new law might create a hardship for residents, especially those on fixed incomes, Ms. Hollander said. “This law is throwing a curveball to the retiree,” she added.

About two-thirds of buildings in the Miami area are older than 30 years.PHOTO: JOE RAEDLE/GETTY IMAGES

Condos are scrambling to comply with these new regulations at a time when insurance rates are doubling and high interest rates have put a pall on the sales market. Up until earlier this year, the condo market in the Miami area was booming.

Real-estate lawyers, project managers and developers expect those prices to decrease next year as condo owners grapple with the increased costs of ownership. Those effects have started in certain submarkets, including Miami Beach and Surfside, where the building collapse occurred.

Statistics aren’t available for the number of buildings that don’t meet the new reserve requirements. But real-estate firms estimate that it could range into the thousands.

“The number of buildings up and down the beach that are going to be hit by this is significant. It’s going to put people in a really, really tight spot,” said Greg Main-Baillie, executive managing director of Colliers’s Real Estate Development division, who specializes in project management.

One of the condominiums he is working with has an average assessment of $125,000 per unit to deal with structural issues. That building, at 500 units, is looking in the open market for one large loan to help with renovations. Another building he is helping has condos priced at around $400,000 with special assessments of $150,000. That building is requiring residents to fend for themselves and find their own individual loans.

“Very few condo boards have an understanding of the effect of the new law over the next 24 months,” said Mr. Main-Baillie. “You’re going to see an exodus of folks, and price effects.”

Suzanne Stonbely has already been hit with a $34,776 special assessment, which she says makes it impossible to keep her home.PHOTO: MADELEINE STONBELY/SOBEMINDBODY.COM

Suzanne Stonbely, a resident on a fixed income who lives with her 21-year-old daughter at Brickell Place Condominium, has already been hit with a $34,776 special assessment to renovate their pool, roof, parking deck and other structural elements of the building. In all, it adds up to another $414 a month for the next seven years, on top of the $853 she pays in monthly maintenance fees.

“It’s actually impossible to keep our home,” said Ms. Stonbely, who canceled her insurance because she couldn’t afford it.

At a recent meeting, Ms. Stonbely and other residents were informed that the reserves were completely depleted. The amount that she and fellow residents would have to pay to fully fund their reserves by the end of 2024 has yet to be determined.

To help offer some relief, Miami-Dade County has earmarked about $9 million to offer zero interest loans to condo owners who make less than 140% of area median income. So far the county has only seen about 50 applications and is working to spread the word about the program.

“We don’t know really how many of these buildings are going to be impacted in a way that will cause excessive burdens on the unit owners,” said Mr. Liu, who helped put the program together. “Hopefully it’s going to be in a minority of cases.”