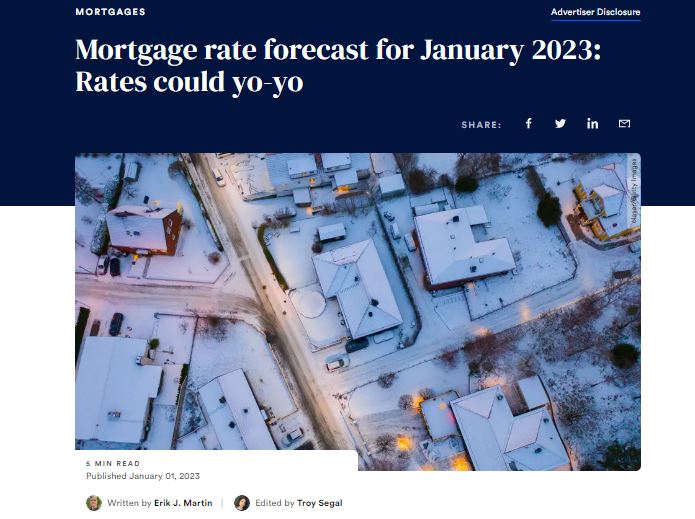 Professor Real Estate® Suzanne Hollander wishes you a Happy New Year! On January 1, 2023, Suzanne’s predictions on the 2023 Real Estate Market were published in Bankrate.- read below.

Oh, the weather outside is frightful, but the interest rate climate isn’t so delightful. That’s because mortgage rates have more than doubled since this time last year. So if your New Year’s resolution is to purchase or refinance a residence, prepare to pony up more cash for a home loan. You may even want to wait for a few of the early 2023 holidays to pass before locking in a rate that will hopefully be more amenable to your wallet.

The good news is that average interest on the benchmark 30-year fixed-rate mortgage has at least slipped below the 7 percent threshold it surpassed in autumn. At the time of this writing, the rate for a 30-year mortgage purchase loan is averaging 6.47 percent nationwide compared to 6.02 percent for a 15-year fixed loan and 6.54 percent for a refinance loan.

Where are rates headed in January, you wonder? That’s a question only the experts should attempt to answer. So we reached out to several of the professionals who closely watch the market. Read on for their predictions.

January mortgage rates: up, down or staying the same?

Make no mistake: It’s no easier predicting rates in January than it is at any other time of the year.

Ralph DiBugnara, president of Home Qualified and a member of the Forbes Real Estate Council, backs that assessment.

“In January, we should see interest rates stay around December’s averages,” he explains, adding that he foresees rates averaging 6.5 percent and 5.875 percent next month for the 30-year and 15-year mortgage, respectively. “The Fed made it clear through the end of 2022 they will keep raising interest rates. They have been unclear about exactly what 2023 will look like for a new policy; because of that, rates have stayed unstable with no clear direction.”

“Inflation is still an issue, but so are the concerns about a recession in 2023. Mortgage rates will yo-yo up and down depending on what the latest economic release or Federal Reserve speech says.

Others envision rates dipping slightly lower in the coming weeks.

“Mortgage rates will likely start the year near 6.2 percent. Two of the main factors affecting today’s mortgage market have turned more favorably recently when it comes to mortgage rates,” Nadia Evangelou, senior economist and director of forecasting for the National Association of Realtors in Washington, D.C., notes. “Inflation continues to ease while the Federal Reserve has switched to smaller interest rate hikes. 2022’s higher federal funds rate has started to tame inflation. Thus, mortgage rates will likely stabilize below 6 percent across 2023.”

And then there are those who anticipate rates climbing undesirably higher in the short term.

“Thirty-year rates will be around 8 percent in January because of the recent rate hike and the mild slowdown in inflation. Fifteen-year rates, meanwhile, will be at 7.5 percent, climbing closer to 30-year rates as near-term risk increases at the beginning of the year,” says Dennis Shirshikov, a strategist at Awning.com and a professor of economics and finance for City University of New York. “Further inflation and weak consumer spending will likely send mortgage rates higher as people grow wearier of the economic reality and it starts to settle in that there may be a deep recession in 2023.”

Curious what the mortgage market makers and lenders expect?  For the first quarter of 2023:

Where will mortgage rates go in 2023?

DiBugnara is hopeful that we’ll have more clarity on mortgage rates relatively soon. “At some point in January, the Fed will make clear what their policy for rates will be for 2023. I believe that they will mostly stay stagnant for now and not increase more,” he says. “Initially, the market may react favorably to that news. But ultimately, until there is a reduction or a clear statement that the Federal Reserve will not raise rates further in 2023, rates will likely stay around what they average in late 2022.”

DiBugnara adds that he’s surprised the Fed has kept to its rate-raising policy in recent months considering recent Consumer Price Index numbers and other economic factors that indicate inflation may have peaked. But he doesn’t believe this rate-increase policy will continue in 2023, “which could be a good sign for lower interest rates.”

Unless inflation surprises to the upside, rates should move closer to the 6 percent threshold in coming weeks, believes Evangelou. “The gap between the 10-year Treasury yield and the 30-year fixed mortgage rate continues to remain unusually large. Given a more positive outlook for 2023, the gap between these two rates may shrink, giving mortgage rates more room to drop,” she explains.

“If inflation has peaked — and indications are that it has — then we’ve seen the peak in mortgage rates,” McBride agrees. “But expect some gyration in mortgage rates as the Fed’s tough talk about higher rates counterbalances any excess of optimism about inflation declining to a still outrageously high 7.1 percent.”

McBride also cautions that “January always seems to produce some other surprise, whether it is market volatility or geopolitical concerns, so expect the unexpected.”

Suzanne Hollander, a real estate law professor at Florida International University, is surprised that the rapid increase in rates has not yet translated into reduced home prices across the U.S. “During the 1970s and 1980s when interest rates were high, prices were low. Buying now with high rates and high prices at the same time creates a very high monthly cost for borrowers to carry,” she points out.

So, what’s the best play for prospective home purchasers in January?

Shirshikov insists now remains an opportune time to purchase if you can afford it. “With rising rental rates, home buyers are still getting a better deal on owning a home versus renting one in many markets,” he says.

“Understand your loan options carefully. The type of financing you should choose will determine the amount of down payment and the home you can purchase,” counsels Evangelou. “For first-time buyers, adjustable-rate mortgages may be a better option. These mortgages have a lower initial rate than fixed-rate loans, and first-time buyers may particularly benefit as these buyers tend to stay in their homes for a shorter period.”

Hollander advises aspiring homeowners to improve their credit and look hard for bargains. “Monitor the market for distressed homes for sale,” she says, adding that foreclosure filings are up 57 percent from a year ago. “Try to build a relationship with a lender, and demonstrate your financial capacity to move fast and take one of these properties off their books.” The HUD Houses being auctioned by the Dept. of Housing and Urban Development and Fannie Mae’s HomePath Ready Buyer Program are two other sources for foreclosure bargains.

If you’re pondering a refi, you probably want to kick that can down the curb as it’s unlikely you can get a rate lower than your current one. But if you’re still set on it, “examine why you want to refinance and do the math to understand how much your new monthly payment would be,” Hollander recommends.