Suzanne Hollander       10/10/2011      Uncategorized
Stay tuned if you own property in the City of Miami.Miami’s new zoning code, Miami 21,  impacts the value, use, density (# of units) and form of property in the City of Miami including Miami’s Downtown Core and the Miami River.  Subject to the new code, I help owners understand the highest value of their property, the best matches for qualified buyers and the potential to upgrade zoning designations. 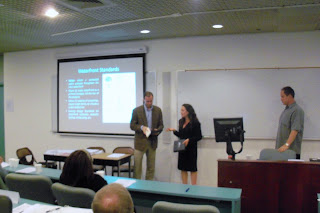 Understanding the new code is essential and for that reason I invited the Director of the City of Miami Planning Commission, Mr. Francisco Garcia, and the Director of the Miami River Commission, to join me in presenting a case study to Florida International University Graduate Real Estate Students about the new code and its direct implications to Miami properties.
The code took effect 8 months ago and Director Garcia played a significant role in drafting the code – a process that took over 5 years and 100 public meetings. Director Garcia is in charge of implementing the new code in Miami.
The new code completely overhauls the former code, zoning ordinance 1100. Director Garcia explained that development in Miami exploded over a period of 6 years– 75,000 residential units, 6,000 hotel rooms, 8 million square feet of office space, 2 million square feet of retail space and over 300 large scale projects were built in Miami. The 20-year-old code was not equipped to deal with this type of development.There was a risk that the pedestrian would be lost on the street by hovering towers and the developers would restrict the waterfront for private uses that did not benefit the public.The new code was enacted to address this and make the city more walkable and livable.
The Director told us that developers “kicked, screamed and cried” over the implementation of the code because they had become familiar with the old code over the past 20 years and were resistant to understand such a new code,even though, the new code simplifies the permit process (I can explain the direct route to obtain a permit to build by right) and is much easier to understand permissible density.The underlying idea is that Miami is a world class city that needs to guide future development that emphasizes its natural beauty and authentic communities.
Director Garcia explained, the new code, starts over from scratch.It emphasizes form over use.It embraces mixed used and smart growth principles. Other world reknown cities that have used form based codes include City of New York, Washington, DC, Vancouver and Prince Georges County, Maryland.
Transects are central components of the new code. The new code designates 6 transects in the City of Miami.The Transect concept is based on the idea that the city is the “human habitat” and the City of Miami Planning Department desires to create a set of environments that go from most natural to least natural and organizing each to be successful near each other. 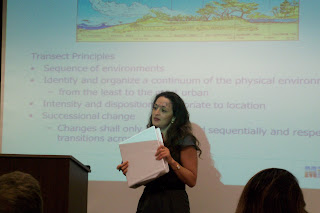 Some areas now have reduced heights to buffer the transition to higher development.Owners may apply for a zoning designation upgrade – this process changed from the former code – changes may be to the next designation level, must go through the Director, the City Commission and are scheduled to be heard twice a year.
High density is still permitted under the code – for example certain areas of the Central Business District allows up to 1000 units per acre, subject to FAA height restrictions.In the Performing Arts District (“PAC”) District up to 500 units per acre are allowed.Most of the property owners that I work with have property in the most urban and dense transect of the City- T -6.Contact me if you would like additional information on the value of your property in the T-6 Urban core area and the learn about the zoning change process.
An example of the new form based code is a building that is lined with windows open to the street and a pedestrian realm (walkway) with a buffer of trees and then the thoroughfare with cars.The cars are regulated to parking in parking lots and the pedestrian rules the street – the car’s “feelings are not hurt” and the quality of life of the pedestrian is improved by shaded walkways and “eyes on the street” – interaction with retailers and other pedestrians on the street.
Miami 21 is exciting as it will create a livable, walkable city in Miami that is focused on the pedestrian.This type of community will increase property values and fuel the desire of people and business from around the world to live, work, play and enjoy the City of Miami
Contact me if you would like more information on how the new code impacts the value of your property in the City of Miami or if you would like information on the process to obtain a zoning change.  info@theprofessorrealestate.com
Student Comment:
It was a pleasure to see Mr. Francisco Garcia and hear his excellent speech about the new zoning code within our city. The fact that he used to work for DPZ sounds even better as that is a world renowned firm with an excellent portfolio. In other words, there is an expert driving our zoning regulations and things can only get better.